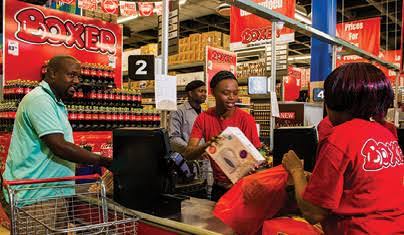 Johannesburg – At least 8500 job opportunities have been created at Ramotshere Moiloa Local Municipality by Boxer Superstore.

The store was officially opened by the Ramotshere Moiloa Mayor, Kereng Mothoagae who indicated that it came as a blessing to the developing town of Zeerust.

Mothoagae said that she was optimistic that the opening of the store will also create a good relationship between the store itself, the Municipality, businesses and other entities.

Mothoagae said that the municipality was slowly realizing the philosophy of VTSD. “I had no reason to refuse this offer from Boxer Super Market when they sold their dream of opening a store in Zeerust. Boxer is one of the biggest stores in the country and it was certain that the rate of unemployment was to be reduced”.

“I am also happy to witness that indeed people have secured jobs and they will be able to maintain their various families. Ramotshere Moiloa is the economy hub that links the SADC countries and as people pass through, they will leave something in our town”,Mothoagae said.

The store was opened end of the youth month and it benefitted the youth of Ramotshere a lot since 90% of those appointed were still young.
Isaac Leseisane who works at the butchery section of the newly opened store could not contain his excitement and indicated that the supervisors are doing the excise of transferring skills diligently.
“They have offered various training and also indicated that if we perform to the best of our abilities, we can get the opportunity to be transferred to other big stores around the country. I really appreciate this opportunity and I can finally smile all the way to the bank come month end”, said Isaac.
Mothoagae congratulated and encouraged the youth to grab the opportunity of employment to build their future so that they can become business-men of tomorrow.

“Your future is in your hands. We always start small, so my advice to you is that start building your dream today and tomorrow you might be a director of your own store. I have nothing more to say except that I am very happy for you and also extend my gratitude to Boxer management. Let’s join hands together and fight unemployment and poverty,” said Mothoagae.

Chris Theron, who is one of the managing directors said that Boxer Super Store is all over the country and even at Swaziland with more than 30 000 employees and that they support NGO‘s. To bear testimony to that, during the opening ceremony, at least three NGO‘s were given R3 000 rand cheque each. They are Mamovic NPO, Dithakwana A re rataneng and O Re Arabetse B Care Centre

How to Check Status of SASSA R350 COVID-19 Grant Application